Little Rock, AR - The Arkansas legislature met on July 28, 1919 to vote on amendment.  Representatives voted overwhelmingly in favor of women’s suffrage and Arkansas became the 12th state to ratify the amendment.  By August of 1920, 36 states ratified the 19th Amendment, recognizing women’s right to vote all across the country.

Today, July 28, 2019, members of the Arkansas Federation of Republican women gather on the steps of the Arkansas Capitol to mark the 100th Anniversary of Arkansas ratifying the 19th Amendment giving women the right to vote. These women stand grateful for the efforts of past generations. Every voice is important in our country. Our only one mindset should be to defend freedom, our Constitution & America.

Cleburne County Republican Women held their Roaring 20's/ Women's Suffrage event.  Sharon Stuthard was the guest speaker on July 11th at the Red Apple Inn and Country Club.   Guests had a choice of Ribeye or Chicken Eden Isle.  Guests enjoyed a game room set up after dinner for Gaming.  Games included craps, roulette, blackjack, texas hold 'em, a long with uno, spoons and other games. Chips were included with the price of dinner and no cash prizes were awarded.  There will be a costume contest, and prizes for the winners. 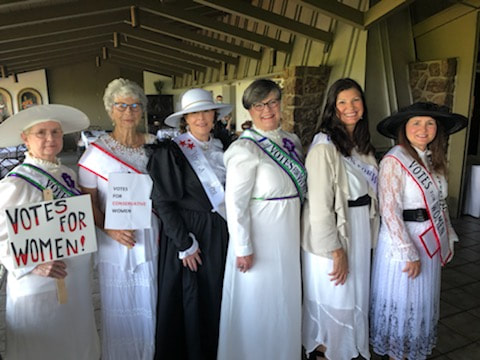 Passed by Congress June 4, 1919, and ratified on August 18, 1920, the 19th amendment granted women the right to vote. On July 1, 2020, at the Marion County Courthouse, a special Julia Child Rose was planted to commemorate the 100th anniversary of the occasion.

Attending the ceremony were many local officials, including Ark. State Representative Jack Fortner, Circuit-County Clerk Dawn Moffet, Assessor Tonya Eppes, Justice of the Peace District 3 Talon Vancuren, and Justice of the Peace District 8 Claudia Brigham. Rep. Fortner mentioned that some of his most thoughtful and thought-provoking comments that he receives from his constituents are from women.

Clerk Moffet spoke about the importance of the 19th Amendment to women not only receiving the right to vote but running for political office. Hattie Carraway became the first female elected to the U. S. Senate and she was from Arkansas. Moffet stated, “Women such as Sen. Carraway paved the way for women like me to run for office.” Justice Brigham spoke about her grandmother being one of the first females to vote in Marion County. Assessor Eppes expressed her thanks to all those women who came before her to fight for the right to vote.

As part of the Yellow Rose Project, a beautiful yellow rose, along with a plaque, given by the Division of Arkansas Heritage, was placed on the southeast corner of the Marion County Courthouse square.

DEDICATION OF SCULPUTURE CELEBRATING THE 100TH ANNIVERSARY OF THE 19TH AMENDMENTS

You’re invited to an event that wasn’t possible 100 years ago.  Join Us for the Dedication of Every Word We Utter,a Sculpture Celebrating the 100th Anniversary of the 19th Amendment, Granting Women the Right to Vote.  Thursday, october 10, 2019 11 a.m.  Vogel Schwartz sculpture garden in Riverfront Park.  In 1919, Arkansas became the 12th state to approve the 19th Amendment to the U.S. Constitution, granting women the right to vote. In 2019, the Every Word We Utter sculpture and Women’s Suffrage Centennial Plaza will be dedicated in Little Rock.

Directions to the Vogel Schwartz Garden in Riverfront Park (400 President Clinton Ave., Little Rock, AR, 72201).
1. From President Clinton Ave., turn left (north) on Rock Street
(this is on the west side of the River Market Pavilion) and proceed
into the Riverfront Park parking lot.
2. After the small parking kiosk, immediately turn left and drive
through the parking lot towards the back side of the Marriott Hotel.
3. You’ll see places to park along the way.

Laneigh Pfalser - 100 years ago this summer, Arkansas became the 12th state to ratify the 19th amendment granting women the right to vote.

This weekend, the Arkansas Federation of Young Republicans celebrated that momentous event at our 2019 state convention.

Today, this 4th generation suffragist proudly accepted the position of State Chair because in this state, #ARWomenLead

On August 26 in American History --

1920 - The 19th amendment to the U.S. Constitution went into effect. The amendment prohibited discrimination on the basis of sex in the voting booth.

1973 - A U.S. Presidential Proclamation was declared that made August 26th Women's Equality Day.

1984 - President Reagan and the First Lady hosted a reception and barbecue for women appointees in the administration in honor of Women's Equality Day, 1984.

From the NFRW Americanism Committee